Have you received any holiday emails this year? Yes, that’s meant to be a joke.

If you’re like anyone else with an email address you’ve probably seen hundreds of holiday emails already and some of those probably arrived well before Thanksgiving.

It’s a crazy time of year for the email inbox.

We’ve already talked about the psychology of holiday email purchasing. That was the first time we mentioned “The Holiday Creep”. That phenomenon is obvious this year because we’ve already been exposed to Christmas emails for a month.

Let’s dig further into the holiday email marketing life cycle. Hopefully we can gain a better understanding of how this time of year works for the consumer. There is still time to make adjustments to your email marketing strategy and now is a great time to start thinking about next year.

The Early Birds Get Shopping Out of the Way

The first cycle for the holiday season is the early bird shopping. We’ve been seeing this in our inboxes for the last few weeks.

Retailers are sending out emails that reach for the person that is ready to make their purchases now so they don’t have to worry about it later. These people are ahead of the game. They have their lists ready and they want to make sure they get everything before inventories get low.

Gander Mountain was after the early bird shoppers with this email.

The Gander Mountain email above is the perfect example of early bird shopping. Not only can people shop now and get their holiday shopping done, they can save too. It’s a great way to capture the early birds out there looking for early deals while inventory levels are still high.

The Deal Shoppers Wait for the Best Deals

Black Friday and Cyber Monday are the biggest days of the year for the deal shoppers. These consumers are the ones that are looking through every newspaper on Thanksgiving cataloging the items they need to get early in the morning on Friday.

It’s a competitive time of year for shoppers and for retailers. In order to stand out you need to be different. 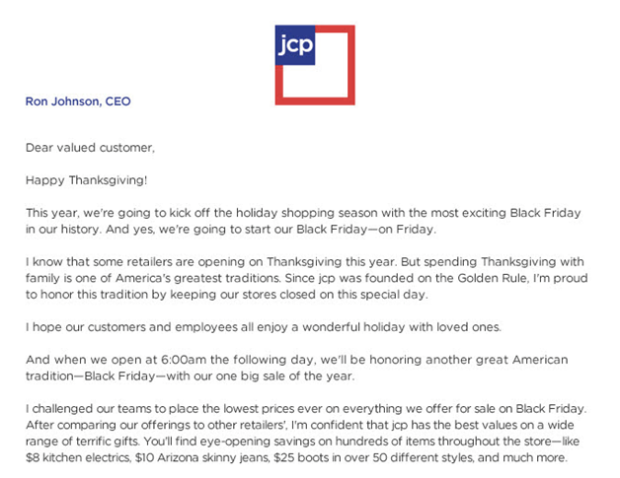 This was a surprise email from JCP this year.

JCP did something completely different this year. They are no longer doing promotions or discounting. Instead, the company is simply focusing on the best pricing. The company also has a new focus on branded merchandise.

There is a good bet that people will still flock into JCP stores on Black Friday to check it out.

The percentage off might not be enough to stand out anymore from the competition. Focus on a merchandise item that is hot or find a way to stand out in the inbox like JCP did this year.

December shoppers are an interesting bunch. They’re probably the minority of shoppers out there. They aren’t eager for the holidays. They kind of go about their business for November and once December hits they’re ready to start shopping for family and friends.

The December shopper is not a last minute shopper. They still have a few weeks to get all the things on their list. Perhaps the best way to describe them is to say they need a little help making gift decisions.

Under Armour knows what guys want, do you?

Under Armour knows they have things guys need. It might not be a glamorous gift, but every guy could use a new pair of boxers and socks for the New Year. It’s a great gift that every guy would like to have in his stocking for Christmas.

For the December shoppers out there that can figure out what they want it’s good to have a little help. Emails like this one from Under Armour solve that problem with a good tip for a gift.

The Last Minute Shoppers Have No Time for Choices

Then there are the last minute shoppers. These folks are the ones that procrastinate until the last second. In fact, they might need to purchase something on the way to the Christmas part on Christmas Eve. 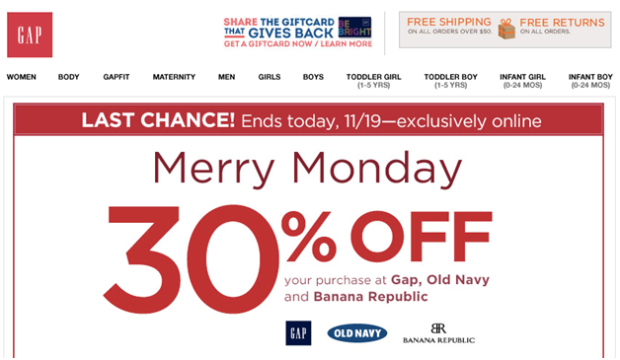 Last Chance at Gap already? Merry Monday? That’s a new one. Get ready for the last chance emails.

This shopper might not even need a discount. They need to have a direction on what they should buy and they they’ll buy it.

In fact, what might be best for this consumer is a reminder that this is their last chance for free overnight shipping. That way they’ll still have their item to their home in time for a quick wrapping before putting it under the tree at Grandma’s house.

Actually, that’s a good point. This shopper probably needs wrapping done too. You can grab a few extra bucks from them if you offer a wrapping service.

Final Thoughts on the Life Cycle of Holiday Emails

We’re about halfway through the holiday email purchase life cycle. The more we understand about the shopper and what state of mind they’re in when we email the better chance we have to send them something that will get them to take action.